NOTE: Continued entries in the ENDICOTT diary while homeward bound.

Sunday, Oct. 28, 1945, 1630: Arrived Sasebo, Kyushu, Japan. Am now awaiting transportation to the next stop. The SMITH is going to tie up to a tender for about 10 days so we'll probably be put on another ship.

Tuesday, Oct. 30, 1945. Very rough and stormy today. Going at reduced speed. Proceeding south along west coast of Kyushu and then east around the southern tip of the island thru Van Diemen Strait.

Friday, Nov. 2, 1945. Fairly smooth. [Learned that the HELM is trying to set an economy record for long distance travel by a destroyer, about 14/15 knots. Oh well, as long as she keeps going east!]

Sunday, Nov. 4, 1945. Rough. [Finally found out why the regular crew always holds their slice of bread to the light. Cooked weavils! ]

Monday, Nov. 19. 1945, 0800: Tied up at Broadway Piers, San Diego. Loaded seabag on truck and got aboard Camp Elliot. We are to be sparated into destinations and have our records checked.

Tuesday, Nov. 20, 1945. My name was called out on a Bainbridge draft leaving tomorrow morning. It won't be long now. We met the fellows who were transferred on September 28th. They ahve been here 6 days so far. Hancock, who I let come in my place and who left a month before I did, hasn't arrived here yet. 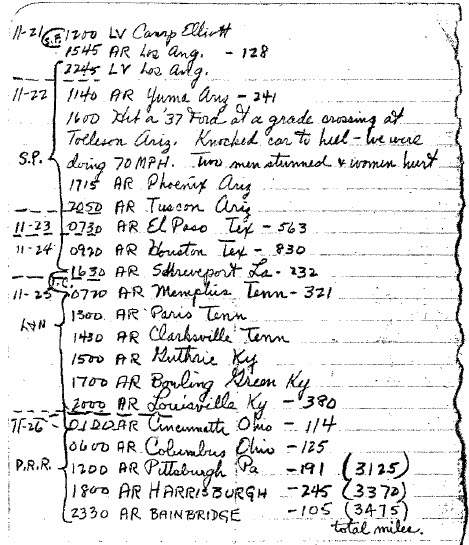 The railroads that hauled us across the states included the: Santa Fe, Southern Pacific, Illinois Central, Louisville and Nashville, and finally the good old Pennsylvania.

The 3,475 mile, 6 day trip took us through: Los Angeles, California; Phoenix, Arizona; El Paso and Houston, Texas; Shreveport, Louisiana; up the Mississippi River to Memphis, Tennessee, then to Louisville, Kentucky, Cincinnati, Ohio, Pittsburgh and Harrisburg, Pennsylvania, and down the Susquehanna River to Bainbridge, Maryland.

Occasionally we'd have a ½ to 1 hour layover to stretch our legs when steam engines would be changed and the kitchen cars replenished. The kitchen provided two meals a day, breakfast and an early supper, served on paper plates which you carried back to your seat.

Initially, the Discharge Special consisted of three sections. When all three of us would stop in the center of a western town, we'd be told how much time we'd have before we were to leave'. Literally hundreds of service men would then descend on the nearest cafe or store and buy snacks, drinks, sandWiches, candy, etc. Soon we'd hear the train whistles calling us back and in about 15 minutes we'd be rolling again. I don't remember anyone taking a head count nor do I remember anyone being left behind. Everyone wanted to go home.

At several stops, particularly in Tennessee and Kentucky, volunteer groups would be waiting for the train with coffee, cookies and magazines. The coffee and cookies were appreciated but the Womens Home Companion and the Ladies Home Journal were not our favorite reading material.

Monday, November 26, 1945, 2330: Arrived Bainbridge Naval Training Station. Since so many relatives were pressuring congress for a quick release of their sons and husbands, we started processing immediately for discharge.

Tuesday, November 27, 1945, 0300: Knocked off processing for some sleep. Many, including me, fell asleep during our initial debriefing. We continued processing later that day, including a final physical and a presentation by Supply selling overstocked shoes, socks and underwear at halfprice. I bought a dozen sets of underwear and black socks.

Wednesday, November 28, 1945. After signing my final papers, I was given my discharge, a train ticket to Philadelphia, and a free bus ride to the Perryville train station.

Back on September 28th when I gave my transfer space to Bill Hancock, he promised to visit Mary and tell her that I was heading home. Bill lived at 413 East Howell Street in Philly.

About a month after I was discharged, one Saturday morning near Christmas our apartment doorbell rang on Chew Street and who stood there but Bill, He had just been discharged and the first thing he wanted to do was to keep his promise and tell Mary I was coming home.

Seems that just before the Typhoon hit Buckner Bay on October 8th, he had been transferred to a Marine Assault Vessel, an old 4-Piper that had been converted, and was heading back to the States. She tried to ride out the storm in the bay and wound up on the reef with her bottom torn out. Back to Brown Beach went the survivors to really horrendous conditions. No tents were left and the Army Air Force had to fly in K-Rations and water for several weeks. Eventually, he made it home. We both agreed that I had made a lucky (or smart?) decision not to take my chances on Brown Beach.

Of my 1,191 days in the Navy, slightly less than half were spent assigned to a ship: USS KEOKUK, 332 days; and USS ENDICOTT, 237 days for a total of 569 days. My major land assignments were: Boot Camp at Newport, RI, 25 days; Morehead State Teachers College Electricians Mate School, 116 days; Headquarters, Pacific Fleet, 320 days; Philadelphia Navy Yard, 74 days (waiting for a seabag); with the remaining days spent on transfers, travel, reassignment, delayed orders and leave.

I had a hard time remembering whether "port" or "starboard" was right or left, red or green. I wrote them down in columns and discovered that all the shorter words

fell into the same column. After that, no problem.